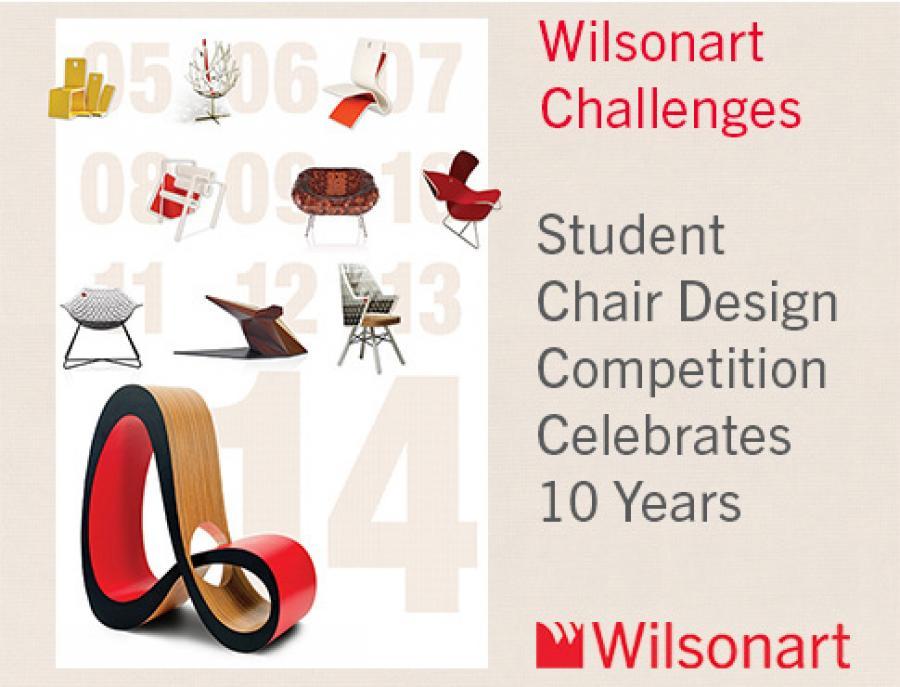 New York, NY (May 15, 2014) – Wilsonart, a leading manufacturer of decorative surfaces for more than 50 years, celebrates the 10th Anniversary of Wilsonart® Challenges… a student design chair competition that is unlike any other in the country. Most design competitions are focused on production – particularly mass production Wilsonart Challenges engages students in creating chairs that celebrate the richness of laminate surfacing materials without the restraints of mass production. The result is a visually arresting collection of one-of-a-kind chairs. The 2014 winning chairs and the students who designed them can be seen at the 2014 International Contemporary Furniture Fair (ICFF), North America’s premier showcase of contemporary design. The ICFF event is the first in a series of year-long celebrations marking Wilsonart’s decade-long commitment to nurturing and inspiring the next generation of designers.

“We developed Wilsonart Challenges with ICFF specifically in mind,” notes Wilsonart Marketing Communications Director Alison DeMartino. “We evolved the original concept of designing a chair into a full-fledged academic experience that allows students to explore both materials and design first in theory and, ultimately, through a hands-on experience of building the final product.”

A Decade of Supporting Emerging Designers

Ten years ago, when Wilsonart worked with Grace Jeffers, design historian and materials expert, to conceive the program, there were no theoretical and hands-on design experiences like it. Through Wilsonart Challenges, Jeffers works individually with the students and has witnessed their design solutions in an intimate way. “I have been told that this is the single most creative project most of the students will ever work on in their lives – these chairs are ‘design’ objects but they also are extremely personal expressions,” Jeffers remarked.

Each year, Wilsonart works with Jeffers to select one university and/or design college to host the year-long program. The competition itself fosters inspiration, innovation and, unlike other student design programs, the hands-on opportunity to actually build their design. Building their chair immerses the students in the materials selection process and gives them a deeper understanding of the intricacies involved. In an age where popular 3D computer graphics and computer technology are pervasive, hands-on building provides both a heightened level of intimacy with the materials and a deeper satisfaction with the completed project.

Each student’s final design must be well-crafted and have a striking and strong silhouette. The students’ ultimate goal is to literally stop someone in their tracks as they walk through the ICFF show floor or flip through the pages of a magazine. While not intended for sale, over the past decade several of the winning chairs have been sold to private collectors.

Each year the class is co-taught by the school’s professors and Jeffers with lectures on the history and morphology of the chair. Additional content is contributed by guest lecturers and Wilsonart representatives. Schools that have hosted the program over the past decade include:

As industrial design has evolved and changed over the past decade, so has Wilsonart Challenges. In year one, students were only required to draw their designs while craftsmen handled construction. Jeffers, Wilsonart and the educators quickly realized that students who built their own design thought differently and ultimately had a different approach to both the form and to the laminate material.

Beginning year two, students constructed their chairs, using tools in their industrial design, engineering or other fine art departments. Other evolutions have included the introduction of an overarching theme for the year’s competition and, more recently, the students naming their creations. The addition of themes and a name for the chairs has helped the students articulate the problems they explored, the solutions they found and their journey from design to creation. What hasn’t changed over the past decade is that Wilsonart Challenges remains the only student design competition of its kind; intensive immersion culminating in the students hand-building their creations.

At its heart, Wilsonart Challenges is an intensive exploration of solving problems through design. Students put their souls and creativity into their projects; the results are both cathartic and exuberant.

The students in the 2014 program at the University of Houston reflected in the program’s blog, “After a semester of pouring our hearts out, wringing our brains like wet towels, and putting our blood, sweat and tears into our final chair prototypes, we have finally reached the end.”

A number of alumni winners are today’s design influencers. As a Rhode Island School of Design student, Charles Brill won the competition back in 2006. One year later, he co-founded the industrial design firm Rich Brilliant Willing, which was named among the “Top 40” designers by I.D. Magazine that very same year. Other success stories include Aodh O’Donnell, winner of the 2009 competition and a graduate of Philadelphia University. “Participating in their program opened doors to the world of design that I’m not sure I would have otherwise experienced. Not only did I intern at Counsil Design and work on a Karim Rashid project, I also worked at Stilex Seating, where I was just named their first in-house Director of Design,” noted O’Donnell. “The competition gave me a new perspective and changed the course of my career.”

Participating schools limit the number of students taking the class to ensure that each student can fully explore the product development process. Wilsonart provides each participating school with a grant, an unlimited supply of laminate for experimentation, underwrites the lectures and provides technical staff to work one-on-one with students as they problem-solve building their design. The curriculum is refined each year, and Jeffers offers core components including the history of laminate, the history and anatomy of the chair and her proprietary “Man Made Natural” lecture, a CEU exploring natural versus man-made materials and what really constitutes “natural.”

Each year, Wilsonart flies several outstanding students and their chairs to the ICFF where their designs are showcased. This year students and their chairs will be at Wilsonart Booth #2248 and #2253 from May 17-20 at the Jacob Javits Convention Center in New York. The 2014 overall winner, Jenny Trieu, was awarded a $1,000 scholarship for her design, the Infinite Chair. “This is an incredible opportunity for all the students,” Jeffers remarked. “While there may be one overall scholarship winner, the experience for all students is priceless.”